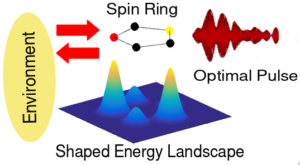 The overarching objective of this program is to provide high-level training in the emerging area of Quantum Information Science and Technology (QUIST) to the next generation of promising early-stage researchers and to equip them with the research and soft skills needed to start their careers in this growing area. QUIST endeavours to exploit the weirdness of elementary particle physics with the ultimate objectives of deploying a Quantum Internet, designing secure communication systems that cannot be compromised by eavesdropping, and providing national security agencies with quantum computers able to crack encryption with unprecedented speed. At a more fundamental level, QUIST underpins innovative developments across a significant range of disciplines including mathematics, computer science, physics, control engineering, semiconductor device technology, and medicine. This program will be run jointly with British scientists and students from Cardiff University and Swansea University, in Wales, UK, capitalising on Wales’ unique position in quantum devices based on compound semiconductor technologies. A cohort of five US students are sent to the United Kingdom, where they are offered a unique combination of hands-on research training, courses and workshops on scientific and complementary transferable skills, and they interact with a cohort of British students, strengthening the unique US-UK bond in sensitive technology and national security.

In this program, the PI-team focuses on high fidelity control of spintronic networks that transmit information by spin wave rather than charged particle transport. Controller design will be based on optimisation of fidelity relative to static bias fields. One of the unique pitches of this research is to bring the concept of robustness in the quantum control arena, specifically, robustness against spin coupling uncertainty and bias field focusing errors. This in itself is already transformative research, as robustness in quantum systems escapes the classical paradigms because of the unique, and fundamentally quantum mechanical, global phase factor that has no classical counterpart. This yields such amazing results that the best fidelity controllers are also the most robust, in defiance of the classical limitations. This would allow, among other things, control to shed light on such physics research topics as Anderson localisation, Multi-Body Localization (MBL) and Eigenstate Thermalization Hypothesis (ETH). The next innovative feature is the introduction of decoherence, which was shown but not yet theoretically proved to make robustness classical, consistently with the very speculative concept that decoherence makes physics classical. The last and probably most innovative pitch of the research will be to approach spintronics from the networking angle, first for the objective of constructing quantum network-on-chip, but also for the reason that many students opt for a networking educational track and that quite a lot of young talent can be tapped from this pool.

More information is available at http://ee.usc.edu/~jonckhee/.

Teaching material for this course is available on X=10Z at Robust Quantum Control, if you have the access code.