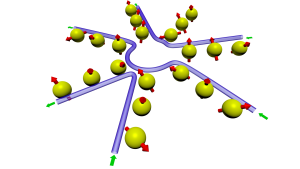 The aim of this project is to devise an efficient and accurate quantum device simulator for fermionic quantum spin networks, which combines a multi-scale differential equation model with measurement data obtained from
the device, to predict device operation given a control. The challenge is to devise: (1) a data-driven simulator for control and (2) an ab-initio atomistic spin dynamics simulator.

Miniaturisation enables ever faster processing speeds, reduced energy use and integrated functionality. However, this scaling process is coming to an end as we reach the scale of single atoms and quantum-mechanical behaviour. Yet, utilising quantum effects, such as superposition and entanglement, is likely to drive new technological advances in computing, communication, metrology, sensing and material science. Certain fermionic quantum spin networks have properties very different from classical networks, that hold the potential for low congestion and higher parallel throughput across few quantum wires, for on-chip interconnects based on spin transport. We have demonstrated relatively simple controls which implement routing protocols for such networks, but they rely on a good simulation model for the system.