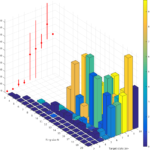 This data set contains energy landscape controllers for information propagation in networks of spin-1/2 particles (qubits) with a ring topology and uniform nearest neighbor couplings of XXZ type. The controllers are optimized to maximize the fidelity of excitation transfer between nodes of ring in the single excitation subspace. The network can be regarded as simple prototype of a router for spin-based information. The dataset contains controllers for rings ranging in size from 3 to 20 spins with excitation transfer from node 1 to nodes 2, 3, … ceil(N/2) considered. Controllers optimized for both instantaneous readout and time-windowed (finite bandwidth) readout are included.

Full information about this dataset is available at https://qyber.black/spinnet/data-static-bias-controllers-xx-spin-rings.

An older version of this dataset has been published here:

Propagation of information encoded in spin degrees of freedom through networks of coupled spins enables important applications in spintronics and quantum information processing. This data set contains the results of applying optimal control of information propagation in networks of spin-1/2 particles with uniform nearest neighbor XX-couplings forming a ring with a single excitation in the network as simple prototype of a router for spin-based information. The control is implementing via spatially distributed potentials, which remain constant during information transfer. The limited degrees of freedom makes finding a control that maximizes the transfer probability in a short time difficult.