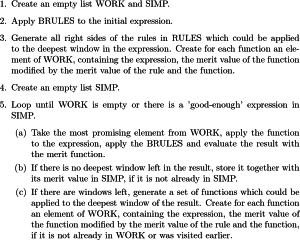 This document describes the PIDS algorithm and its application. PIDS is an algorithm to simplify expressions which are given as nested lists. The simplification is done by a set of rules which can be applied to the expressions. However the rules just describe how the expression can be rewritten, the real simplification is driven by a merit function. The purpose of PIDS is to simplify mathematical expressions. There might be other applications, though. In this article we just give a few examples for mathematical expressions. Note that the whole algorithm and this document is still under development.