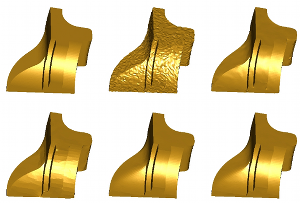 This paper considers an approach to mesh denoising based on the concept of random walks. The proposed method consists of two stages: a face normal filtering procedure, followed by a vertex position updating procedure which integrates the denoised face normals in a least-squares sense. Face normal filtering is performed by weighted averaging of normals in a neighbourhood. The weights are based on the probability of arriving at a given neighbour after a random walk of a virtual particle starting at a given face of the mesh and moving a fixed number of steps. The probability of a particle stepping from its current face to a given neighboring face is determined by the angle between the two face normals, using a Gaussian distribution whose width is adaptively adjusted to enhance the feature-preserving property of the algorithm. The vertex position updating procedure uses the conjugate gradient algorithm for speed of convergence. Analysis and experiments show that random walks of different step lengths yield similar denoising results. In particular, iterative application of a one-step random walk in a progressive manner effectively preserves detailed features while denoising the mesh very well. We observe that this approach is faster than many other feature-preserving mesh denoising algorithms.